I thought I’d write an update as some things progressed already. 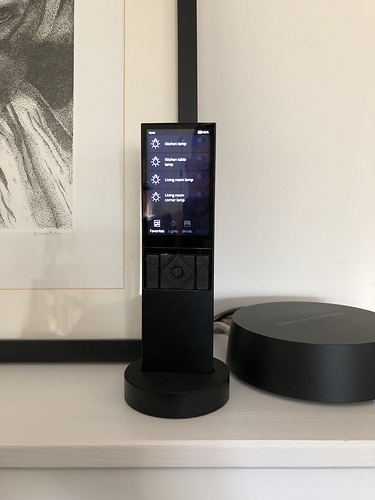 As you can see, I’ve built one remote. The buttons are not the final ones, just the ones I made at home from silicone. I am still waiting for the samples.

Also regarding the assembly, everything fits nicely and works. I used some hot glue as you can see so I can replace things when I got the final parts.

The acrylic plate on the front ended up 0.4 mm smaller than I wanted, so a new round of cutting is in progress to make a perfect fit.

The charging dock also works, but I’ll replace the LED resistors there as I think the LEDs are not bright enough. I reduced the brightness in the initial design, but I think I overshoot a bit. Other than that, the LEDs breathe while charing and solid while fully charged. You’ll be able to change these functionalities when assembling the remote by soldering the two wires differently.

A lot of things happened on the software side. The battery fuel gauge driver is working now. Still need to read through the datasheet to calibrate it precisely, but generally it’s working fine.

The proximity/gesture/light sensor also works. Interrupt driven and the display brightness is adjusted after the ambient light when auto brightness turned on. When the display is off and you reach for the remote, the proximity sensor picks up your hand and wakes the remote up. I haven’t put any functionality for the gestures yet, but the backend for it there as well.

Did a lot of code cleanup and also experimented with haptic feedback patterns to find appropriate one for long presses, short presses and when you rotate a dial. Works nice and easy to implement in your own components.

Some basic functionality with shutdown and some basic logic is also in the software now. Also managed to tackle some bugs, I’ve found.

Here’s another shot of the remote: 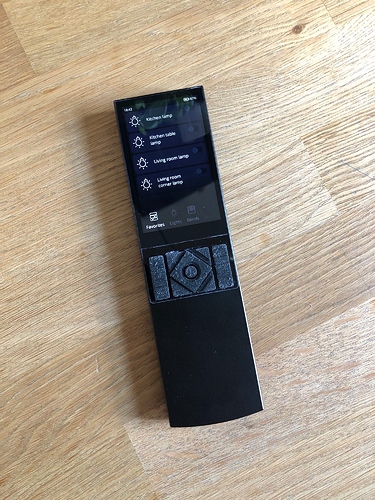 It looks so nice, Marton - and I can’t believe that you have made this much progress in such a short time!

Wow Marton, i agree with all the above. Thank you so much for dedicating your time to this project to help us obtain an awesome smart remote

Keep up the good work, it looks yummie

Hi Márton, I just saw the YouTube interview by SV Sognare and ended up here.
Congrats for the hard work!
One thing I may suggest, please stay away from crowdfunding. Let us have this kit strait from you. I think you would end up with hundreds of orders for the remote handling those would be on a different level. Credibility of the crowdfunding is also way down for me and many people. Too many money grabs and failed projects…
I am actually a Smartthings and Openhab user so you could also branch out in these communities too.

It might not be crowdfunding but a prepaid preorder system. Otherwise I cannot make it happen as I don’t have the funds to order everything in advance.

It would be great to have someone looking at an integration with openhab or SmartThings as well. I’m sure some will, but I don’t have those systems

amazing work you’ve done in such a short time! you’ve built a working prototype form scratch well done! I cant help thinking this is the NEEO we all should’ve got ( not with all the super glue and home made buttons